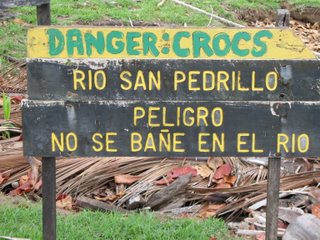 The Osa Peninsula, home of Central America’s largest remaining chunk of old-growth coastal rainforest in Corcovado National Park, is not like the rest of Costa Rica. Here, trees grow bigger than resorts, amenities are primitive, and roads are few and boat docks even fewer. In the Osa, nature is in charge.

My wife, Hayley, and I knew the Osa would be different from the rest of this pleasant country from the moment we arrived at the domestic airport in San Jose, where we found that out of the 40 or 50 people in the terminal, we were the only two passengers on the 10-seater flight to Drake Bay. Upon arrival in Drake Bay’s primitive, gravel-strip of an airport, the sounds of the jungle—a cacophony of insects and birds–rushed at our ears. At the thatch-roofed, open-walled “terminal,” 6 or seven passengers milled about patiently to board our plane while a police officer draped his left arm sleepily against the wing of a tiny blue police single prop parked just off in the grass. We later learned that “all of the activity” at the airport (the police airplane) was because the Minister of Energy and the Environment was lost in the Osa Peninsula’s Corcovado National Park, and a search and rescue mission was underway to find him. 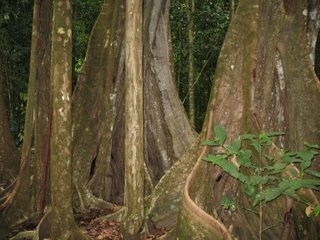 Following a short drive on a very primitive road through several rivers without bridges, we arrived in the town of Drake Bay, a couple of houses and a café, where we were picked up on the beach for the 30-minute boat trip to the Marenco Lodge and Rainforest Resort. Time passed slowly, if at all, and by the time we arrived at the Marenco’s beach and hopped out of the boat to wade to shore, we had already forgotten what day it was. The Marenco Lodge, nestled in its own private nature reserve of 500 hectares, sits high on a hill overlooking the rainforest and the Pacific Ocean. Toucans and pairs of brightly colored scarlet macaws roost in the trees just beyond the open walls of the dining room, and white-faced capuchin monkeys roam the grounds.

That first afternoon we saw no other people as we walked on nearby pristine beaches and body surfed waves in the warm Pacific Ocean. The next day we took a boat trip to Caño Island to snorkel and scuba dive 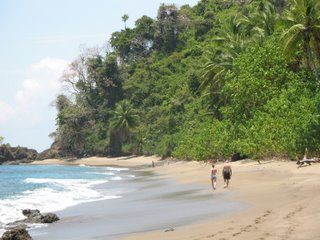 , where the water teemed with reef sharks, rays, sea turtles, and schools of fish. On our last full day in the Osa, a naturalist led us through thick, old-growth forests in Corcovoado National Park, pointing out three monkey species, hawks, snakes, poison-dart frogs, and other wildlife. Another group in the area saw two pumas, but we were not so lucky. Jaguar are not uncommon in the park. The air was thick with moisture, making it hard to draw a deep breath, as we walked through the old-growth trees and thick underbrush. Corcovado reminded me of the Amazon Basin, a place I’ve visited a number of times in Peru, Bolivia, and Ecuador.

The skies turned cloudy again our last night in the Osa, and like the night before, water poured from the sky. Between the pounding of the water on our tin roof and the booming of the loudest thunder I’ve ever heard, it was impossible to really sleep. Sometime in the early morning, while dozing between explosions of thunder, our cabin shook violently. In a sleepy haze we thought our cabin was falling off the cliff, only for the shaking to stop as quickly as it started. Earthquake, we would later learn. Just another night in the Osa.

In the morning we were awakened with the news that the rivers on the way to the airport had grown dramatically overnight, and the road was impassable; our flight had been re-routed out of Sierpe, more than 2 hours away by boat.

Nearing the end of our lon 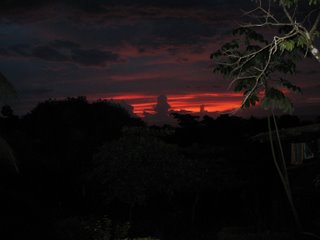 g, wet boat ride out of the Osa and back to civilization, I lifted my face from the hood of my black gore-tex jacket to catch a last peak at the magnificent mangroves lining the water. Through the rain my eyes caught the amiable, plump, middle-aged Tico across from me in the boat. He was hunkered under a black plastic garbage bag, which he had pulled up over his head, his shirt off to keep it dry. His slacks, like my zip-off pants, were soaked. He lifted his head for a quick peak outside, and our eyes caught briefly. Water ran down our foreheads and poured off of our noses, but we were in the Osa, where nature dominates everything, and we started to laugh. Pura Vida! Pure Life in the Osa Peninsula!

We booked this amazing journey through Detour, The Adventure Travel Marketplace