Although it’s tough to play favorites with all the gorgeous sights I saw in Chilean Patagonia, nothing can compare to the first time I saw Grey Glacier. The Glacier is in Torres del Paine National Park and is part of the Patagonian Southern Ice Field. It can be seen from miles away on a clear sunny day. As we trekked our seven miles to get to the glacier, the winds were incredible. They must’ve been close to 40mph. I could barely walk straight and was warned to take each step cautiously, as the wind could easily blow me over, especially with a heavy 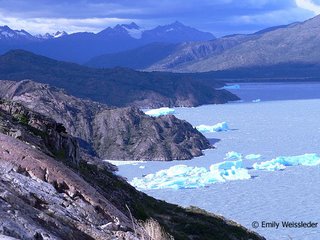 pack on. My cheeks were quivering in the wind as I could barely hear my guide even though he was only five feet in front of me. As we fought the wind, the glacier was not yet in sight. However we began seeing gorgeous icebergs floating in Lago Grey, each on with its own blue or white tinting, reflecting the suns rays with this indescribable luminous glow. The surrounding mountains and partly cloudy sky made for a picture perfect approach.

A little over half way to our ending point for that day my bilingual guide stopped us. He said he wanted us to be prepared to see one of the most amazing sights in Torres del Paine. So about 100 feet later there it was, still two miles away, but in perfect view from the top of the hill where we stood. Looking straight ahead past the lake was a sea of ice with towering walls and jagged edges. Because we were higher than the glacier we could see the front wall and then what seemed like miles of ice behind it. It got me so excited to get even closer so after I snapped a few shots we continued the trek and ended at the lookout point. Below us tons of icebergs had congregated together close to the shore. Despite the once again roaring winds, I was able to get pretty close and took as many pictures as I could without losing my balance and being blown over. The sounds of the floating icebergs crashing below were like listening to the constant crashing of vehicles at a monster truck rally; so loud and forceful. I stood there for almost an hour, admiring nature’s pure and unspoiled beauty.

I went to Chilean Patagonia in March 2006. It was just the end of summer there so the crowds were dying down but t 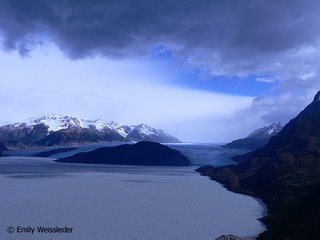 he winds were picking up. I had always wanted to go to Patagonia, but I really had no expectations heading in. I knew I wasn’t going to be climbing huge peaks but I was prepared to trek a little. I found that the “W” – the easier of two popular treks in Torres del Paine National Park – would become my perfect Patagonian adventure.

The “W” is named that way because it is a series of trails linked together that form a W shape and it passes by all of the highlights within Torres del Paine Park. Hiking by huge 12 million year old granite spires that rise to over 10,000 feet, while only at 1500 feet above sea level is truly something else. Not to mention the turquoise blue lakes, amazing wildlife, stunning and prevalent waterfalls, and of course never-ending glaciers. Our trek averaged about five to seven miles per day and took us approximately five days to complete the “W”. We weren’t speedy by all means, taking stops all along the way to try and capture Patagonia’s stunning beauty on film. Of course it’s impossible to ever capture how unique and beautiful Southern Chile is without seeing it for yourself. I opted to join a guided tour so I wouldn’t get lost and end up having to live in a granite cave in the middle of the park. Note, I did meet a lovely English woman who ended up spending two nights in a cave with some local Chilean climbers, so at least if I did get lost and live in a cave I had a chance of finding some friends!

Because most of the trails in the park are at a relatively low elevation, the actual hiking was not extremely difficult. I’ve had some hiking experience, mostly in Colorado where I live so I was prepared. The elevation gain was really nothing along the way; a couple 100 feet here and there but no real steep inclines or descents. Around each corner was a sight like out of a magazine; each spot so different than the one prior, and none like anythin 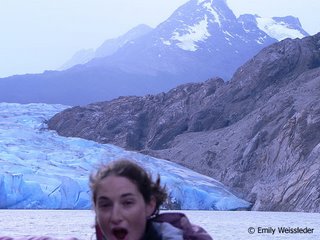 g I had seen in the USA.

The sight of Grey Glacier was truly one of my best memories of my four week adventure to Southern Chile. Those moments are forever inscribed in my memories, and I would recommend an experience like this to anyone who wants to be amazed by this awesome planet we live on.

Mother Nature really thought of everything when she created the jaw-dropping, awe-inspiring and ever impressing land of Patagonia.

This Trip Report was written by Emily Weissleder, a Travel Consultant for Detour, The Adventure Travel Marketplace

One thought on “Glacier! by Emily Weissleder”