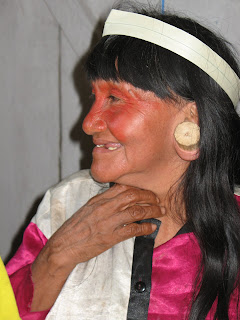 60 Minutes had a great piece this past Sunday on the $27 billion dollar lawsuit facing Chevron for environmental degradation in the Amazon Basin. NPR had a radio story on this last week as well. This is the largest environmental damage suit in history, and it is being decided by a single judge in Lago Agrio, Ecuador, sometime this year.

In the 1960’s Texaco started to drill for oil in one of the largest oil reserves in the America’s, in Ecuador’s Amazon Basin. Texaco, along with partner PetroEcuador (Ecuador’s national oil company), pumped out 1.5 nillion barrels of oil from the jungle. But with each well came roads, pipelines, and pits filled with toxic oil waste. When Texaco finished drilling they abandoned the pits, causing oil to contaminate groundwater and to seep into the Amazon Basin’s streams.

This region of Ecuador, the upper Amazon Basin, besides being one of the most biodiverse regions on the planet, is also home to numerous indigenous tribes who rely on the clean water in the rivers and streams for drinking water, food, etc.

Chevron bought Texaco in 2001, and now they may be held responsible for the environmental mess left behind by Texaco in Ecuador. While who is responsible is at debate in the law 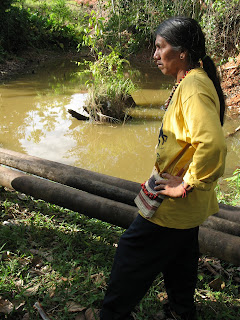 suit, the environmental degradation isn’t really debatable. Of course there are disagreements on how many pits there are, or the cost to clean up the mess, but no one argues there is no mess at all.

I experienced this environmental degradation first hand in 2007 when I visited the Huaorani Ecolodge, a community-based tourism project in the Amazon. The Huaorani Ecolodge was created, in part, to provide jobs and income for the Huaorani so that they don’t need to take jobs with the oil companies to help destroy their homeland.

Oil was discovered on Huao territory decades ago, and today vast portions of their previous land have been cleared for wells, roads, and pipelines. On our trip, one moment we were floating down a placid, wild, river, listening to Huao origination legends as told by Moi, the Huao member who has become famous due to Joe Kane’s book “Savages,” and the next we rounded a bend and encountered denuded forest and rusty pipelines. On our way back to town and the airport, we stopped along the road put in by the oil companies to see some of the oil waste pits; they are, frankly, disgusting. I’m quite sure we would never allow open oil pits that seep into rivers and groundwater in the United States.

While I don’t know the answer to who ultimately is at fault in a contractual or legal sense, and thus who should pay, it is quite clear that someone needs to be held accountable and must pay both to clean up the oil, and to compensate families for pollution-caused health issues and the loss of their traditional lifestyle caused by this pollution. This will be an interesting trial to watch.